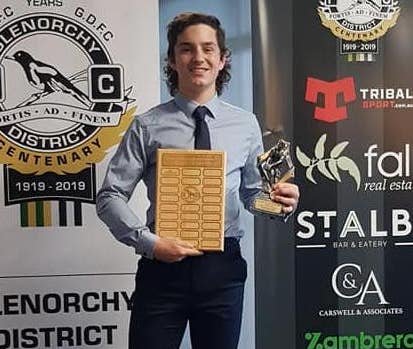 Bobby was a much-loved character of our club, a premiership player, life member and long-time volunteer, who sadly passed away this year.

Club coach Paul Kennedy, who coached Saavedra the previous two seasons in the U16s, said Jude was a fitting first-up winner of such an important award.

"Everyone knew how passionate Bobby was about this club and about our young players, it was infectious," he said.

"Jude is a kid who has improved out of sight through his dedication and passion for the game and for representing Glenorchy, a club he loves very much at such a young age."

Saavedra, 17, was a surprise inclusion in this year's TSL senior list, and finished an impressive 7th in the development league best & fairest.

But with the COVID-impacted season streching the playing numbers for the U18 team, he doubled up on six occasions in his age group and was such a standout he claimed the best & fairest award by 10 votes.

U18 coach Anthony Cowley paid tribute to Saavedra's work ethic, after he turned an invitation in the club's Jimmy Webster Squad into a full pre-season with the senior squad and a TSL contract.

"Jude is just a a classic example of hard work paying off. He took the big step and did a huge pre-season with the seniors and he got the rewards," he said.