The Glenorchy RSEA Magpies are delighted to welcome Darrean Wyatt to KGV.

Wyatt, a 203cm utility, started his senior football career as a Collingwood rookie, before playing in the VFL with Frankston and Coburg, where he was coached by Magpies mentor Paul Kennedy.

“What Darrean brings to the table is size, athleticism and versatility,” Kennedy said.

“We have a very mobile group of key position players and Darrean adds really nicely to that mix, and he will certainly make our team more adaptable.

“In the VFL he played forward, back and in the middle, and that versatility is very nice for the coaching staff to have at our disposal.

“Due to his height and athleticism, he played on some of the best young key position players on AFL lists whilst in the VFL, so he is used to taking on high-level opponents.”

Wyatt, 28, will also play a role in the club’s new school pathways program, a partnership with Montrose Bay High School to create new lifestyle and sporting pathways for young people in the northern suburbs.

Originally from Sandringham in Melbourne, Wyatt first made his sporting name playing college basketball in the USA for Coastal Georgia, where he averaged 7.7 points and 6.0 rebounds per game in his final year, leading his team in rebounding.

Wyatt is currently visiting the club to join in the end of the pre-Christmas training block, and will move to Hobart full-time in January. Welcome Dazz! 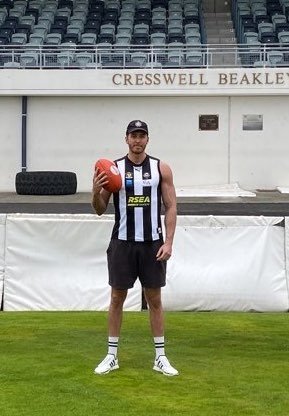