The conversion mightn’t have been en pointe, but the Magpies ultimately cruised to a 45-point win at North Hobart Oval on Sunday, thanks to a masterclass from two of the club’s all-time greats.

With the much-improved Demons almost creating the boilover of the season eight days earlier at UTAS Stadium – where they led North Launceston late in the fourth quarter – Glenorchy headed into the Round 8 clash ready for four quarters of tough footy.

Indeed North Hobart were first through the big sticks thanks to a crafty snap from Thomas Reeves, but from there the visitors settled, booting four of the next five goals to lead by 12 points at quarter-time. 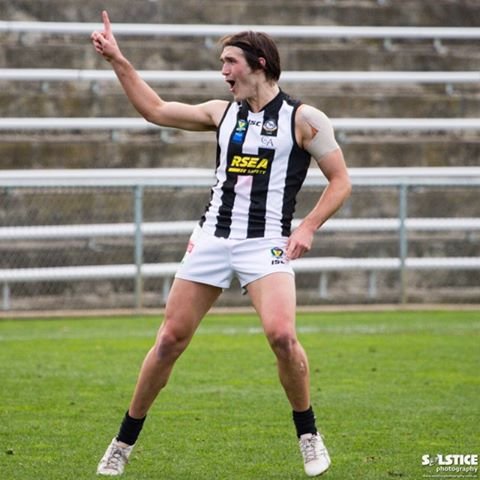 *Pics thanks to Solstice Digital & Photography

Yet despite dominating possession and territory after the break the Magpies didn’t capitalise, booting 2.7 and two out on the full for the term, while the home team slotted a pair of six-pointers in quick succession to close to within two points in time-on.

A classy late major from Cal Daly ensured the Glenorchy boys led by 10 points at the long break, and they reasserted their dominance after intermission, booting 6.11 to 1.5 in the second half to run out comfortable winners.

Dynastic duo dominate
The stars of the day were the evergreen pair of Jaye Bowden and Rhys Mott, who amassed more than 70 possessions between them, using it craftily to help the Magpies dominate inside 50 entries, 64-40.

Bowden has now played 227 games and booted 509 goals, and is on track to sit fourth on the club’s all-time games played list by the end of the Centennial Season.

Mott is in vintage form, averaging 28 possessions per outing and, all going well, will play match 150 and become a Glenorchy Life Member in the Centennial Game against Clarence on Friday 31 May.

Bevy of contributors
Daly was also brilliant on Sunday, his four goals and tough contested work around the forward packs setting the standard at ground level, the Pocket Rocket now fifth on the league's goal-kicking table.

When the ball was airborne Aiden Grace’s hands were vice-like, his three majors giving him 21 for the season and moving him back to the top of the TSL goal-kicking tree.

Zac Webster returned to the senior team for the first time in 2019 and produced a polished display, racking up the touches in the middle of the ground and swooping back with poise to help the defensive unit.

There were plenty of other quality contributors, Sam Rundle and Ben Kamaric were excellent in the midfield, Adam Roberts provided some elite forward pressure and the dependable Trad Duggan was a rock down back.

Family Day
The Magpies return to KGV next Saturday (25 May) to face Launceston, who currently sit fourth on the ladder after almost toppling Lauderdale last week.

The game will be a ‘Family Day’, with family entry just $9 and indoor and outdoor entertainment on offer for both little and big kids!